The tasks involved in building me and Alex’s LM7-powered, T56-shifted 1988 Oldsmobile Cutlass Supreme Classic can be divided into two main categories: shopping for parts and actually going out to the garage to do physical work. Both types of tasks are enjoyable, but each has its place and time. Shopping is better suited for times when Alex is with me, or when it’s particularly cold outside, or when I’m feeling lazy. Actual physical work is better suited for times when the weather is pleasant and there’s someone present who is not wearing oily latex gloves and can keep Alex from placing greasy auto parts in his mouth. It’s not that the future doesn’t hold plenty of hands-on automotive enjoyment for Alex, it’s just that he’s only 14 months old. I am determined that he’ll complete his first T56 swap at a younger age than I completed mine. What better gift can a parent give their child than the opportunity to have an even better life than they did? But he may need another few months before he’s able to be a capable garage assistant. I know that somewhere on the Cutlass I saw a sticker that said 18 months and up. On second thought, maybe that was on his wagon that resides next to the Cutlass. Or on the tricycle. 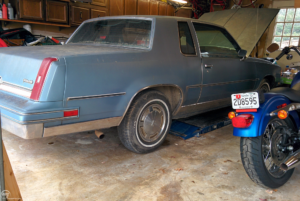 ONE OF THE LAST TIMES IT WAS SEEN IN ONE PIECE

But the weather, my sleep patterns and the depletion of my bank account aligned recently, and I was able to get some work done on the Cutlass and take a break from parts-shopping. I decided that one of the first things I’d do was to turn the Cutlass into a blank canvas onto which Alex and I could build our dream car. This meant removing the old drivetrain. Before I could do that, though, I had to accomplish what will surely prove to be the most difficult task in converting a 27 year-old, carbureted, automatic transmission retirees’ car into a fuel-injected, manual transmission hot rod: convincing my wife to help me unbolt the hood and place it on the roof of the car. In retrospect, it would have been much quicker and easier to rig up an elaborate system of pulleys and chains to the ceiling that would enable the cat, with weeks of training, to help me lift the hood, but hindsight is 20/20. 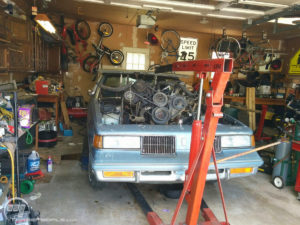 So with my wife having begrudgingly helped me get the hood out of the way, removing the engine was a pretty straight-forward process. Although I have pulled numerous engines in the past, I still learned several things along the way:

1. Fuel lines, if you forget to disconnect them, will break free on their own.
2. Power steering lines, on the other hand, will hold your engine in place no matter how hard you try to pull the engine before realizing you’d forgotten to disconnect them.
3. Once something is filled with transmission fluid, it is never, ever completely empty.
4. Once transmission fluid spills on something, it will forever and ever be coated with it.
5. The exhaust crossover under the engine will get in your way when trying to lift out the engine.
Fortunately, I was able to unbolt the exhaust crossover pipe from the manifolds while the engine and transmission were hanging from the engine hoist, just slightly lifted from where they’d been lovingly placed by a GM employee 28 years ago. Never was I more glad that I’d found a low-mileage example to make into our project, as the nuts and bolts broke free and allowed the exhaust to come apart with no drama whatsoever. 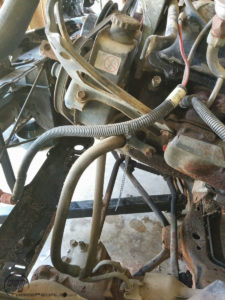 SECOND TO SPIDERS’ SILK, POWER STEERING HOSES ARE ONE OF THE STRONGEST FIBERS KNOWN

So now the Cutlass is at what I’d consider the point of no return. It’s not that I couldn’t lift the old engine back in and bolt it in if I wanted to. But at this point, installing just about any kind of drivetrain, including a jet-propulsion system or steam engine, would be far easier than trying to reconnect all the vacuum lines that were on the old engine.

And now Alex and I have our blank canvas. I guess it’s time to do some shopping…… 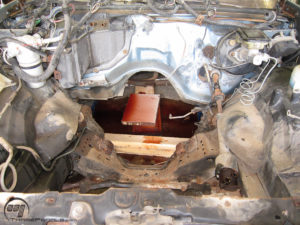 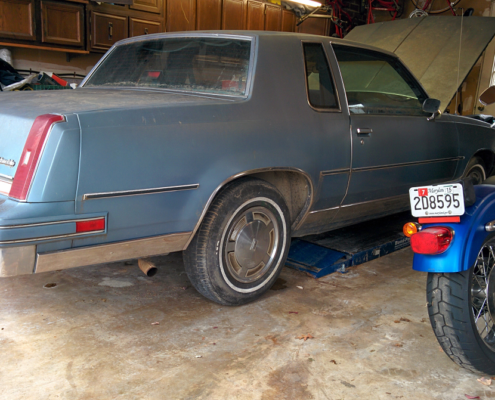 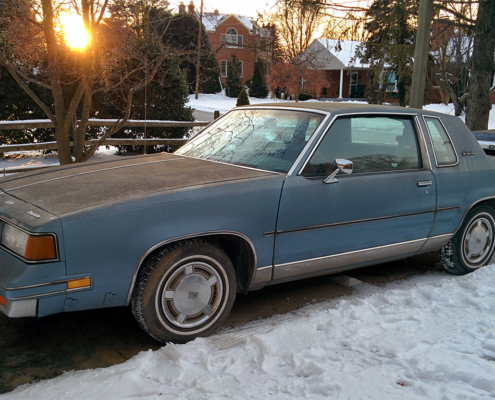